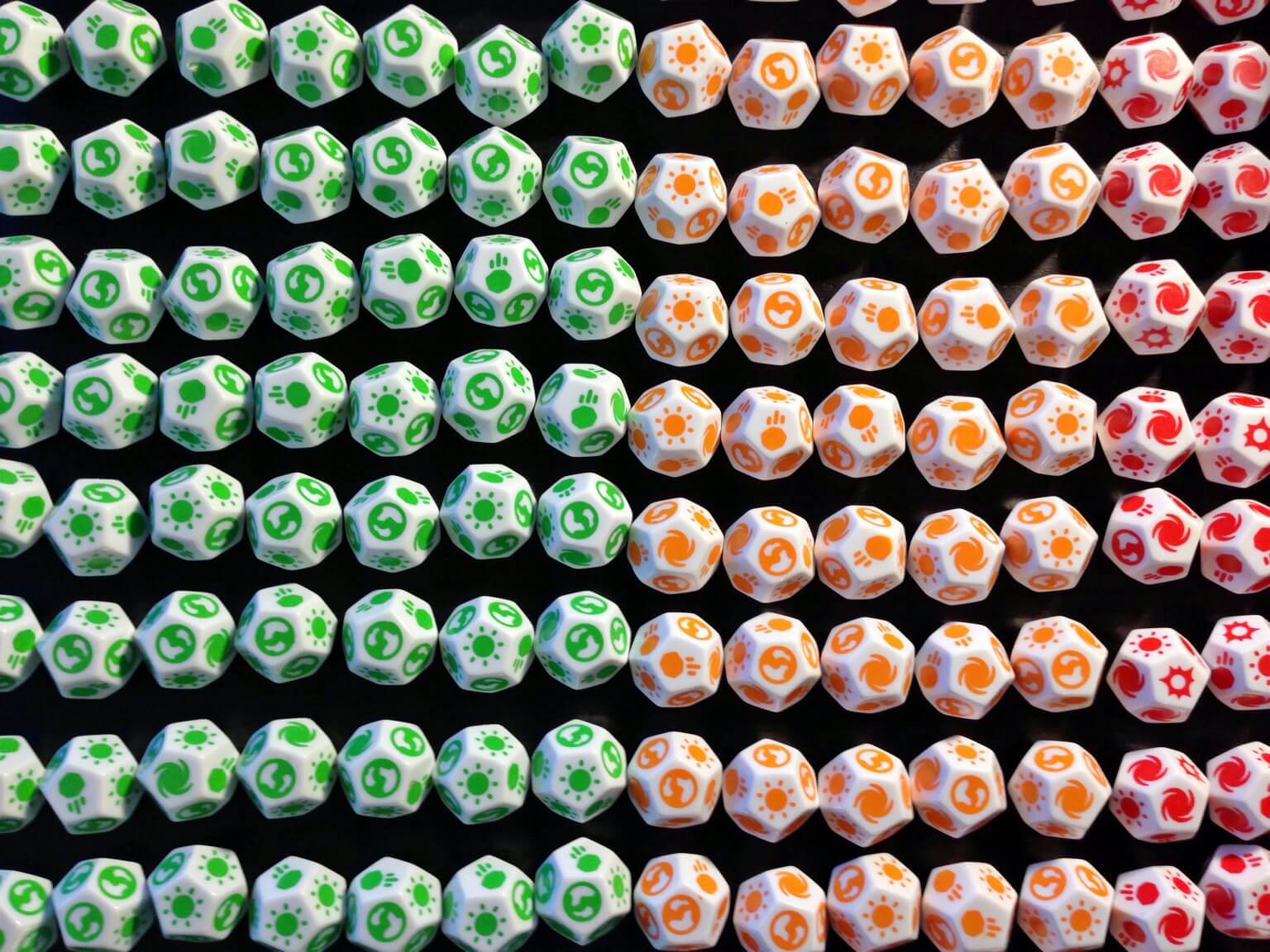 EDITORS NOTE: The following was written by my friend and old co-founder, Jon Wheatley.

I had been kicking around the idea for some kind of space themed dice game for a while. I thought it would be a really nice metaphor for what actually happens when galaxies are formed. The dice represent balls of matter floating around the universe. Sometimes they bump into other balls of matter and become stuff.

I decided to design the game around the “press your luck” genre. The concept of these games is usually pretty simple. Some things are good to roll and some things are bad. The goal is to roll as many good things as you can before rolling a bad thing and resetting your score. The first person to get X good things is the winner.

The goal with Space Dice is to roll as many “habitable planets” as possible, before you roll 3 black holes and make your galaxy unstable. A “habitable planet” is a planet near at least 1 star and without space debris hurtling towards it. The first person to roll 10 habitable planets is the winner.

Here’s a VERY early prototype of the game I was working on over Christmas. It really helped to make a prototype, as I could actually play the game rather than everything being hypothetical.

Having finalized the basic concept, I needed to make sure the game would actually be playable. There should be a good chance of rolling the things you need to roll to score. It shouldn’t be likely to die in one roll. Rolling a supernova (which destroys every planet every player has scored up until that point) shouldn’t happen very often etc.

I spent a few hours hacking together a little rails app which would play out 100,000 rolls in a few seconds and tell me the chances of everything coming up. The script let me easily play around with the values on each of the dice and tweak the chances of everything happening. It’s still online if you want to look at it (http://spacedice.herokuapp.com) and the code is on github (https://github.com/jonwheatley/Space-Dice-Stats). Please excuse my bad ruby code.

I hired a graphic designer to make some nice icons. I was ready to start talking to factories.

I looked on alibaba.com and found some dice manufactures in China. It turns out 12 sided dice are MUCH more expensive than regular 6 sided dice (about $0.25 per dice vs $0.05). I reluctantly decided to go with the 12 sided dice anyway, because the shape of them worked much better with the theme. Rarely do you see celestial bodies that are square!

The factory did a test print and made a complete set of space dice. Now it was starting to become real!

The factory was happy to ship out the tester dice they made before entering full production. Luckily, this coincided nicely with Chinese New Year so I had a bit of time to play test the game and request any changes. When I received the package, I excitedly opened it and anxiously waited for my girlfriend to get home so we could play Space Dice for the first time.

I may be a little biased here, but the game was great fun. Everything worked as intended, and my girlfriend picked it up pretty quickly. The only thing that was a little awkward was keeping score of how many habitable planets each of us owned. We solved this by using a pen and paper to keep track, but I’m planning on building a simple Space Dice score keeping iPhone app at some point.

The next step was the packaging. I found a factory in LA that made custom tubes with removable tops. This was good because the tube could also double as the dice shaker. They were nice enough to send over some pictures of the tubes being made.

The last thing I needed was instructions. This turned out to be a much harder task then I was anticipating. There were a lot of things that seemed obvious to me that absolutely were not obvious to other people when I spoke to them. It was also hard to explain all the rules, including rare edge cases, while keeping the instructions short and not intimidating to new players. I needed professional help.

I hired a freelance copywriter to give me a hand which made things much easier. There was still a fair amount of back and forth until we decided on the best way to structure and word everything (it didn’t help that Sam had never played the game before!) but we eventually hammered out some pretty decent instructions.

They just needed some design (thanks David!) and they were ready.

Everything arrived at my apartment and I started packaging sets together. This took much longer than I thought it would (1.5ish minutes per set, 333 sets, just over 8 hours).

And here it is. The final, completed set of space dice in all its glory.

The margins aren’t great right now, but I think at a slightly larger scale I can get the price down to about $5 per set.

Head over to spacedice.com if you’d like to buy a copy of Space Dice.

Last month I shipped Space Dice. Bringing the game to market was interesting but that’s really only half the story. Here’s how things are going one month on.

As one might expect with something like this, shipping is a huge time sink. The first few days after launching were spent almost entirely packaging space dice sets and hand writing addresses. It wasn’t long before our daily trips to the post office were met with audible groans from the staff there. Each package needed to be individually weighed and stamped. For international orders the addresses on the customs forms needed to be manually typed in. It was horrible.

I looked into a few different options. I really wanted to automate the whole process so I looked into local fulfillment services. Unfortunately at such small scale and with the margins I’m currently working with the math doesn’t work. It would cost a few dollars extra per order (I received quotes ranging from $3 – $10) on top of a monthly storage fee.

I now have a dedicated shipping computer (~$300 from office max). My friend recommended getting a zebra label printer which uses thermal paper to print labels rather than ink (~$100 from amazon) and a free USB scale from stamps.com.

Now shipping takes a fraction of the time. Stamps can be printed rather than arduously hand written and customs forms are automatically filled in. The shipping software also spits out a free tracking number which can be passed onto the customer. All that and USPS will come and collect!

The game was mostly well received although a few weeks in I started to get a few reports that there was a bug.

In the game it’s possible to roll a “supernova” which completely resets everyones scores. In my simulations and play testing this rarely happened (there’s about a 6% chance). I enjoyed the rule because it meant however far behind you got there was always an outside chance you could roll a supernova and reset the scores so you’re level with your opponent again. Unfortunately in all the play testing I did I only ever played the game with one other person.

This was a big mistake.

The problem is the more people you play the game with the more likely it is to roll a supernova during a round. There’s a point where it becomes more likely than not that a supernova will be rolled essentially making the game last forever. This was a huge oversight and something I’m sure any professional game designer would have noticed instantly.

Luckily it’s a relatively easy fix (the rules are being tweaked so a supernova just resets your score and not everyones) but this was still a harsh lesson in the value of play testing more than you think you should.

Despite the bug, lots of people were enjoying the game. A few people sent me pictures of themselves or their families playing which was great to see. Someone even made a really cool score card app which lets players easily track scores in the game.

I had some success approaching local toy stores and asking if they’d like the carry the game. Out of 80 stores contacted so far, 10 were interested in doing a small test run of the game to see how it performed in the store. I didn’t do anything fancy at all here. I just searched yelp for toy stores, found their website, then their email, then cold-emailed them and told them some high level info about the game. Considering my somewhat unsophisticated approach, I think a 12.5% potential conversion is pretty good.

The first month had gone great but my website sales graph was starting to look like a reverse hockey stick.

It became clear that if sales were going to continue I was going to have to do some marketing. The margins aren’t good enough for adsense or Facebook ads to work (currently each $20 sale nets me $11.37 per set. Each paid click costs ~$1 so I’d need something like a 15% conversion to make it work. Right now my conversion is 3% so that’s not feasible). Something a little more creative was needed.

I decided to setup a space themed tumblr and use it as a way of funneling traffic to spacedice.com.

Each day it’s updated with 2 (hopefully) interesting space facts. Each fact has a nice little illustration to make it a little bit more eye catching and sharable. 150 facts cost me $1,050 ($300 for the facts and $750 for the art). It remains to be seen if I’ll get a return on that but things already look promising. Some posts are getting hundreds of reblogs and traffic to spacedice.com has doubled since launching.

So what’s next? I’m almost completely sold out of the first batch so I’m in the process of ordering more. After a lot of searching I found a factory that makes some really nice 12 sided for less than half the price I’m currently paying ($0.15 vs $0.36). They’re slightly smaller than the dice I have been using but the size of the dice doesn’t effect the game at all. This also means the packaging could be slightly smaller and shipping would be cheaper. It seems like a win all round.

The new price breakdown per set will look like this:

This is a huge step down from the $8.63 per set I was paying before and makes selling sets at wholesale prices much more feasible.

Update: SpaceDice.com has now been sold. 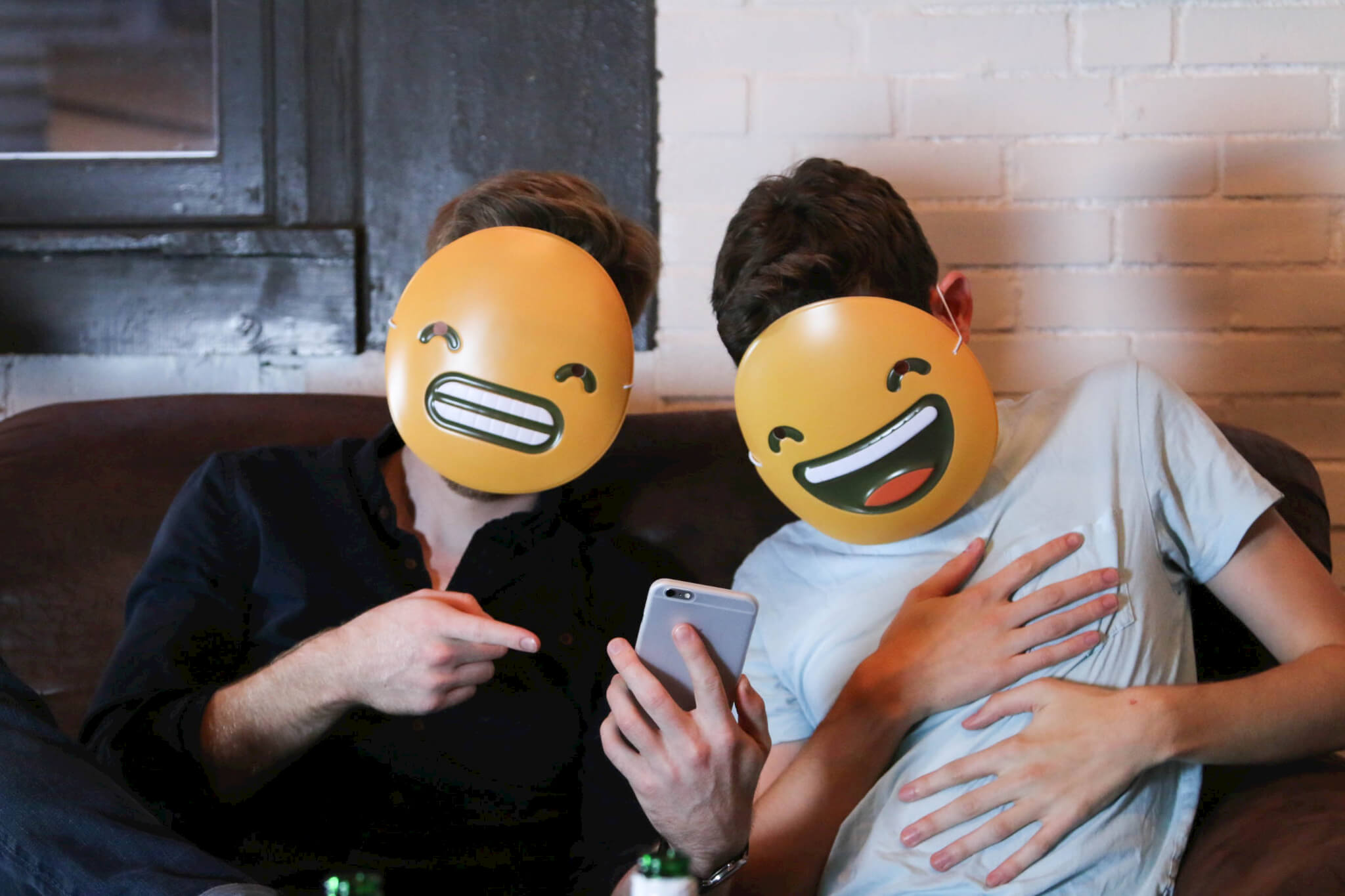